If You Are Brave 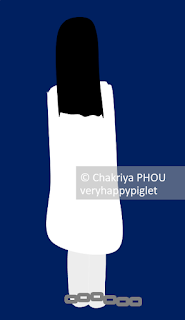 It was before year 2000.
Tom planed to start business in Phnom Penh. Because his work was related to history, he chose to rent a flat near the genocide museum, Tuol Sleng. The flat was at first floor. It had veranda. It was both office and staying-place.

He recruited few staffs. One of them named Samnak who Tom considered as friend. Samnak told Tom should change office. Tom asked why and he said, 'I have heard people here talk about hunting.' Tom laughed, 'Really?' 'Yes,' nodded Samnak. 'You know there were many people killed in Tuol Sleng. Their souls are still in there. I heard that at night there were sound of crying or walking feet with chain. All people living here hear it.' Tom put his hand on Samnak's shoulder and said with smile, 'We are men. We have to be brave.' Hearing it, Samnak knew that Tom would not change office so he did not say anymore.
The office started. First few days, Tom recognized his staffs (beside of Samnak) left the office at 4:50 PM. When they left, they left in group and they behaved they had to leave before 5:00 PM.
Tom was angry. He thought Cambodian was lazy, came late and left fast. He thought of making a working rule. He typed. In office, he was alone. Samnak went to buy some stuff. It was 5:05 PM. He almost finished his typing. Then he heard door-knock. He needed to got up from his chair to check because the door was wooden. He walked to the door. He opened it. No one. He closed the door and returned to his seat. The door was knocked again. Tom walked to open it. There was no one. He stepped out to stand at veranda and looked around. There was no any person even a dog. He went into his office. As he shut the door, he heard the knock. He quickly opened it. It had no anyone but as he stepped out of the door, he found a woman was walking. She showed her back to him. She was walking to the stairs. Her feet were chained.Tom heard she said to him, 'If you are brave, follow me.'
It was strange that Tom followed her just hearing her words. He wanted to see her face. He did not realize why he felt like that. He just knew that he wanted to see her face so he chased her. The woman walked. Tom kept following. He did not know where she brought him to. He did not know where he was going. He just put eyes on her and walked after her. It was about 5 minutes. Then Tom was like wake up from dream. He looked around himself. He was at somewhere he was not familiar. It was a huge land with bushes and garbage. Then he saw few garbage pickers were looking at him with question eyes. Samnak appeared. He ran towards Tom and asked, 'Why you come here?' Tom tried to think and said, 'I saw a woman and I followed her.' Samnak pulled his hand and walked him back to office.
Tom kept saying he followed the woman. Samnak told Tom that when he arrived, the people living at ground floor told him about Tom so he followed direction they pointed. He also asked people along the way especially their neighbors, they said they did not see any woman, just saw Tom walking over there. Tom did not say anything when he arrived at office. He switched off computer. He had dinner with Samnak silently. When Samnak got home, he went to bed.
Next day, Samnak arrived at office. He met house owner at the stair. The owner told Samnak that last night, Tom called her and told her he wanted to move out.
When Samnak went into office, he met with Tom. Tom told him with trembling voice, 'Last night, when I slept, I heard woman whom brought me walk in the evening saying before the office, IF YOU ARE BRAVE, DON'T LEAVE.'
at October 06, 2019