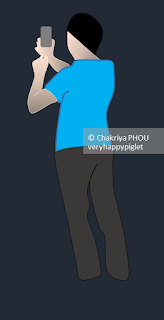 One evening, I went to Olympic Stadium to exercise walking with my friend. We walked about 1 hour then we separated for our own home.
My house was near so I walked. In general, the people there, closed the door and stayed inside house. The whole street was quiet. Only me walking over path.
Along the way, there was a spot. Before it was flat but now it was under construction, the flat was removed remaining the empty land.
When I approached, I saw a man was holding cell phone standing before the spot. Looking at his action, I thought he was taking photo or video of the construction. I walked without care. As I passed him, I felt coldness from direction of his standing. Also, I felt weird and got good flesh. The weird feeling made me decreased the walking speed and looked to that man. He stood showing back to me. He wore sky blue color T-shirt and black pants. I did not see his cell phone model clearly. He behaved normally. I thought it was not about him, it was about myself; perhaps I was not well. Thought like this made me released. I turned my face to the path but then I found something. When I was turning my face from him to the street I was walking on, my eyes met his legs. I opened eyes big as I saw his pants without leg or feet. How could he stand if he did not have leg? The cold wind came again. I got it. It was about me, it was true about him. He was not human. I was pretty sure, he was ghost. I increased walking speed to leave there fast. When I was far about 10 meters, I turned my head back. Actually, I did not know why I did that. I was scared.. I wondered myself too why I turned head to see the ghost. Well, I thought perhaps it was that ghost man. He wanted me to know. He wanted to tell me that I was correct he was ghost.
When I turned my face to look behind, there was no one.
I nodded my head and turned face back. I increased the walking speed then I ran. I felt safety when I reached home. I locked the gate quickly and came into house. My family was watching TV. I did not say anything, just took shower and had dinner normally.
at October 27, 2019