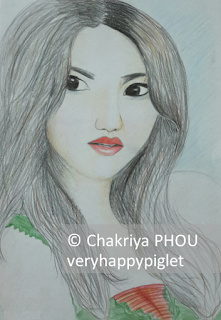 Once upon a time, there was a girl named Neang living in a village with her father.
Neang was the prettiest girl in the village. She engaged with a man.
One day, her father fell sick. She called doctor to see her father. The doctor said she should take him to see doctor in city. Moreover, she needed to be hurry because his illness got more serious. After the doctor left, Neang went to her fiancé house to ask him for help. Her fiancé said to her that, 'Your father is old. Even we bring him to see doctor, perhaps he could not live longer. So, don't waste money on him.'

Hearing that, Neang claimed, 'He is my father. No matter what, I will not abandon him.' Then she left the house. She ran to rend bullock cart but the owner refused because he was afraid her father would die on the way on his cart, it would bring bad luck to him. Neang left with tears. In the village, there was only one bullock cart for rent. Now, he did not agree even she gave much money to him.
While she was walking back home, she met a lady wizard. The wizard asked about her problem. After Neang told her, the wizard said, 'I cannot make you a cart nor help your father recovers from illness. I just can help you to take your father to city but you have to give up your beauty whole life.'
Hearing that there was way to help father, Neang was glad, 'I don't mind to give up anything.'
The wizard gave a small bottle to her and told, 'Drink it when you got home.'
Neang was happy receiving bottle from the wizard. She thanked her.
Seeing her love for her father, the wizard liked her so she gave a tiny bag to her and said, 'This bag is for you. Open it. It can fulfill your wish but only one wish.'
Neang received the bag and thanked. The wizard disappeared. Neang came back home. She opened the bottle. It had liquid inside. Neang drank it.
The next morning, the villagers were all surprised and shocked to see a fat girl carried old man on back. They recognized that girl was Neang. She changed herself in a night from the fairy to fat girl, very fat. Her fiancé ran to see. As he saw her new appearance, he was scared. He declared break the engagement with her. Neang agreed silently. She did not care what people talked about her. She just carried her father and walked to city.
She spent 4 days to reach the city. When she arrived, she tried to find doctor. At that time, the prince was visiting the city. He saw Neang was asking about doctor from the citizens. He ordered the guard to ask her and knew the story. He praised her so he took her to palace and called doctor to cure her father. Several months later,her father got well.
The prince told her he loved her and wanted her to be his queen. Neang was hesitated because she thought the queen should be beautiful but she was fat. But after the prince said, 'I don't love pretty woman. I love woman with kindness and morality.' she agreed to love him. They got engagement.
Neang and her father stayed in the palace waiting for the wedding day.
The prince usually took her to meet with his noble friends. They liked to mock him of choosing fatty wife. At first, the prince did not care. But more and more talking about the appearance of his future queen, he started to embarrass. He tried to escape from her and did not take her to attend the event or meet with noble guest like before. Neang knew. She was upset. She cried. She ran to her father and asked, 'Father, am I really ugly?' Her father touched her head softly and said, 'In my heart, you are the most beautiful in the world.' Hearing her father speech made her smile and release from sadness. She stopped crying.
At night, Neang stood at the window. She reminded all her past. She stated, 'No man does not love pretty girl. No man loves me truly than my father.'
Then she remembered the bag the wizard had given to her. She took it and made a wish, 'I want to leave this world with my father to where no one can find us.' After wishing, she opened the bag. There was sparkling colors flied from the bag and created a doorway before her. Neang brought her father into that magic door and it closed.
The morning came. The maid told the prince that Neang and father disappeared. The prince commanded guards to seek but could not find them. The prince thought it was good because he could find another pretty queen and no one could blame him for she ran away herself. After, the prince ordered to stop searching and he found new girl to marry.
For Neang, she lived with her father in the place with happiness and peace.

Email ThisBlogThis!Share to TwitterShare to FacebookShare to Pinterest
Labels: Fantasy