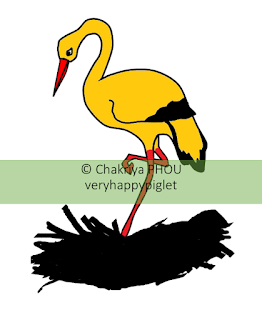 
There was a heron living at a pond. Heron had golden fur which could double amount of thing. The heron gave its golden fur to lion, rat and ant. Each got one fur.
One day, the heron fell sick. Golden fur became normal fur. Furthermore, fur fell off of heron's body.
Three animals heard.
Ant thought it was small so it should better helped itself.
Lion thought it was kind enough that it did not eat the heron.
Only rat brought rice to feed heron everyday until the heron got well. When the heron was well, it got back its golden fur. It gave lots of golden fur to rat before it flew away.
As Lion and ant knew that the heron had golden fur, they ran to ask but they could not meet a sight of heron. They went back home sadly.
For rat, it lived happily afterwards.
at November 15, 2019