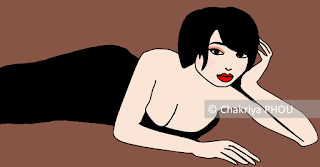 It is a summary of love story of Reka and Dani.
Yes, both of them are women.
It started when Reka was at seven years old.