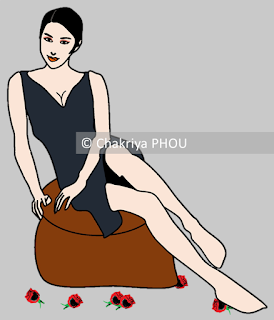 In an old building - very old - there was only an apartment living by a man. His name was Time. He was single and stayed alone. His apartment was his home and his office.
Just looked at where he lived, it could be seen clearly that he did not earn much. Yes, he is a private detective. He worked for himself; he worked for pleasure; he worked because he liked. Money was not his priority. Still, he needed money to survive, at least to buy instant noodle.
Few months ago, there was no customer and his instant noodle almost ran out. He hoped a customer showing up today or he would starve to death.
Sitting in his chair, he heard noise. It was foot step. According to his experience, he was sure it was sound of high heel so his customer was a lady.
Due to his brain, she should be rich herself or maid of someone rich.
Time smiled when he thought about this.
His customer was walking up the stairs. She needed to walk slowly because the stairs and way were full of dirt and garbage. Also, it was not brightening. Time wished she would not take wrong step and fell over stair.
It was more than 5 minutes to finish the stairs and walked along dirty and smelly corridor to reach the door.
Time sat waiting patiently.
Ding.
Door bell rang.