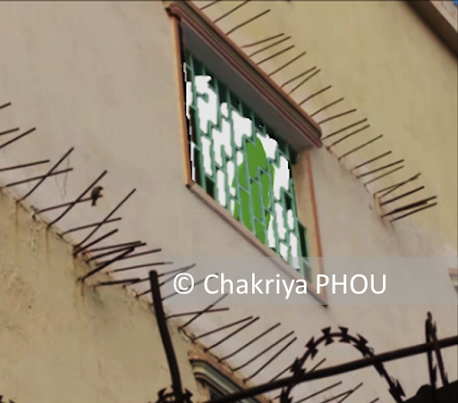 There was a young man named Sali from province to work in Phnom Penh.
Sali rented a room and stayed alone. He stayed for 5 days already.
Where he stayed, there were two buildings which their behind faced each other. Sali's room had window and at opposite building, there was another room and its window faced with Sali's window.
Every evening, when Sali came back from working, he usually saw a young girl, about his age, standing at that window. She wore green T-shirt and she looked down through the window. Sali wondered what she was looking at for it had nothing down there, just land and some bushes. Moreover, Sali noticed she stood without moving and she presented herself from 5:30 PM until 5:30 AM.


How could Sali know? Because when he arrived at room about 5PM, he did not see her, until when he went into bathroom and came out, he saw her. Few nights, he got up at 1 or 2 AM to pee, he walked pass window and saw her still standing. And when he got up in the morning about 5AM, she was still there, until he came out of bathroom, she disappeared.
That girl was weird. Sali wanted to ask her, but he was afraid that he would scare her because in Cambodia, mostly woman does not talk with unfamiliar man.
On his 8th day, Sali arrived at room like usual. He unlocked his room and in. He opened the window and the girl was not there. Sali took towel and cloth and went into bathroom. After, he came out. He was drying his hair with his towel. At same time, he walked to stand at the window and looked at that window. The girl was already at the window. Her eyes did not move from the ground. Sali watched her with his eyes brow narrow.
Suddenly, a bird flied to hang on metal stick that coming out of cement wall of building. It was strange, the girl changed her sight to that bird. It was first time that she changed her looking location. That action made Sali interested. He followed up her action silently. The girl did not move her body, just paid her eyes on the bird that was singing freely up to its nature. Suddenly, in a blink of eye, the girl showed her tongue very long, fast, towards the bird, caught it, and dragged it into her mouth.
My Buddha, Sali witnessed with his own eyes. He was big surprised to see that. He opened eyes and mouth big.
Unbelievable.
Like a flash, he closed window and locked it. He felt something not well. Immediately, he walked out of his room and climbed downstairs to a first room of building, at ground floor. It was where the owner of the building stayed. He did not knock for he was frustrated of what he had seen. The owner was surprised seeing Sali coming.
'What's matter?' Owner said.
'I saw a girl in opposite building.. her tongue was long and it dragged a bird into her mouth.' Sali described. The owner face was normal when he heard that. He was not surprise like Sali. He smiled little then said, 'It's fine. Come back to your room.'
Sali thought that it was strange. He refused to go and forced the owner to tell him. Then the owner told the truth that the girl had rented a room in his building, that was that room, but she had died for a month ago. She had killed herself after she had found her boyfriend had cheated on her.
She is not human.
Sali got a chill after he was told. He was scared. He came back fast to his room. He did not dare to open the window.
Whole night, he did not even shut eyes, because he was scared about that girl ghost. Especially, there was big wind outside his window and the wind blew scary, like someone was calling him or trying to open his window. Sali wished the sun showed up soon or he would scare to death. He went through one scary night difficultly, he did not sleep.
When he saw it was 5:30 AM, he was glad, but he was not sure and still scared, so he waited until 6AM then he got up and collected dress putting into his bag and came out of the room. He called the owner that he would not stay anymore. He went to office with dress bag. He told his colleague and asked to stay with him for few days. Later on, he found another place to stay.
at July 31, 2020