History of glory of my grandparents - continued

Though great grandpa Uy gave dowry, it was not much.

After marriage, my grandfather set own house between two houses by using their walls to be his walls and their eaves to be his roof.

He stopped working as the assistant to a taxi driver.

My grandfather tried hard to earn money but it seemed he didn't get lucky. As for grandmother, she sold shaved ice dessert in front of the house.

Because of stress and wanting money to start a business, my grandfather went to do gambling. At that time, he played 'rooster fighting'. At first, he won, then he lost and lost. He wanted money back so he kept playing everyday, but the more he followed, the more he lost even the necklace.

It was like his claim. Not long after my grandfather quitted gambling by himself; no one told or instructed him to stop. 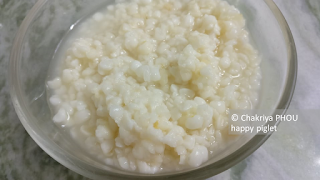 However my grandparents' life didn't have any improvement.

My grandmother was worried then great grandpa Uy told her to not worry, they would have a child soon and that first child - whether a girl or boy - would bring them good fortune.

My grandmother remembered what her father said.

Then she was pregnant but she didn't know. She sold shaved ice dessert as usual.

One day there were a few trucks carrying soldiers across her house. They stopped before her house and a soldier came to her saying that they wanted beer and asking if she could organize for them.

I don't know if they booked some money or not. I just know that at that time my grandfather and grandmother didn't have money and they ordered a lot of boxes of beer, but my grandfather agreed with this business.

The soldiers told the date they would come to take, then he left.

At that time my grandfather and my grandmother found out they were becoming father and mother.
It was good news and it was a kind of encouragement to the poor couple.

It was the year 1957. Cambodia just started to develop itself after getting independence and sovereignty. There were no local products even beer. My grandfather had to go to the Cambodia-Vietnam border to buy it.

I was told that my grandfather rode his old bicycle from his house to the border. He put some on the bike then walked it (he didn't ride on the bike to have space to put boxes of beer as much as possible) to home. He did it back and forth and he did it at night only - to escape from the customs officer.
I don't have any idea how many nights he did that work. I was just told that he worked alone with his bike until he got the number of boxes the soldier wanted.

When the date arrived, my grandparents had been waiting since the morning but they didn't see the soldiers come.

They waited till afternoon, still there was no shadow of the soldiers' truck.

My grandmother was very worried because in order to buy the beer, they borrowed money from others. I don't know who they went to, I just knew that they borrowed from a few people and they charged interest. If the soldiers didn't come, they would have a big trouble.

You might think they could sell the beer to others, wholesale or retail. You can do this in the present, but at that era it was different. Firstly, Cambodians in rural areas liked sour palm juice, not beer; it took a very very long time. Secondly, it was a risk to put the stuff in a house especially when their house was small and had no proper door or wall to protect.

Not only my grandmother but also my grandfather, he was worried too but he was a man, his mind was determined, he agreed to take responsibility if the business was failed.

Actually, my grandfather had a plan already. If the soldiers didn't come to take, he would bring the beers back to the seller - and the seller accepted it but the price would be lower than when they sold to him.

But like great grandpa Uy had fortuned, it was their rising time.

In the evening, the trucks came and stopped before the house. The last time soldier came to pay and called his buddies to carry the beers to on car then he told my grandparents he needed more and set the date he would come to take.

And it was a start of my grandparents' glory.