First day at office is needed to be careful 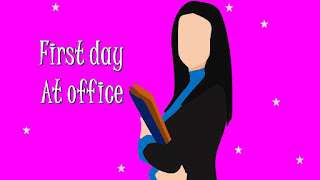 In this article, I will show my experience and what I have learnt from first days at offices.

To indicate the matter that had happened to me, but I don’t mean it happens the same to other people. I just want to give an example to the readers, if they meet the same or similar situation, what they should do.

My senior asked, “Do you know how to write a meeting report?”

The senior did not say anything, and I did not notice anything.

After working for a few weeks, I heard that my senior and some colleagues had talked behind me that I had no competence, I could not even write a report.

My senior asked, “Can you write a report?”

Then the senior assigned me to write a meeting report.

I remembered they said my report content was weak and lacked many things. They also blamed me, “You said you can do it. Look at your report. It is like primary pupils writing.”

My senior asked, “Can you do a report?”

After hearing that, they did not say anything.

Few days later, they told me to write a report of a meeting. I did my best. The senior did not say anything after seeing my job. Since that day, they have usually asked me to write a report. I did not refuse and worked with all my heart. Later on, I found the reports that I made were under the name of my senior – no my name was mentioned even to the ear of the boss. Then I knew I was used.

My senior asked, “Do you know how to write a report?”

They gave me a test. I made, but not a perfect job.

Then I could learn their style of writing reports. I gained new knowledge.

In the workplace, you have colleagues.

Some colleagues are good. Some are bad. Some want to use you. Some want to kick you away especially when they know you have a higher opportunity than them to get a promotion.

When you are a newbie, you have to spend time studying about work and the people in the same organization as you.

During that, you can meet trouble. So the best way to protect yourself is to hide half competence. From the first day, don’t let anyone know what you can do and what you cannot do. Try to stay low, but don’t stay under them. Try to make yourself equal to them.

With this tactic, the bad colleague might not dare to give trouble to you. They might act, but not full action, because they don’t know you; they are afraid they might get into trouble. Then you will be at peace and can take time to learn about the work environment and your colleagues – until you surely find out who you can believe and who you cannot believe.