My 8 healthy home made food

In this article, I don't describe about how to cook. I just want to indicate about names and ingredients of food that my family has made. Along with photos that I took by my phone.

I call them healthy food because they are made by fish and vegetable. 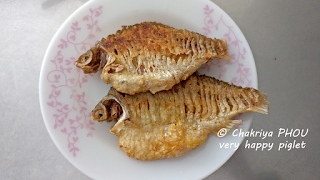 Cambodia is country of water, so there are many kinds of fishes.

I don't know this fish's name.

Well, I don't like it because it has many bones. Their bones ever attacked my throat many times. However, I can enjoy it if it is fried until its bone crispy. 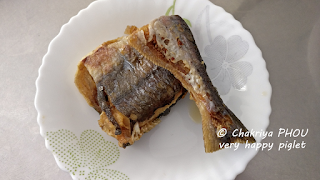 This one I don't know its name too. I just know that this fish has no scale. It has bone, but not much like above fish.

I like when it is mixed with salt and fried. 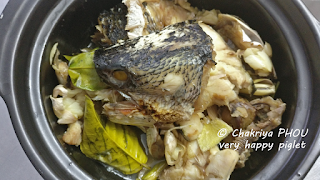 It is a kind of salty-sweet fish recipe.

Inside the pot, besides fish, there are leaves of kaffir lime and white garlic; these two things are used to remove smell of fish. Then there are salt, sugar and fish sauce.

To be real braised fish of Cambodia, it should be added pepper, but because I cannot eat spicy, so my family does not put it. 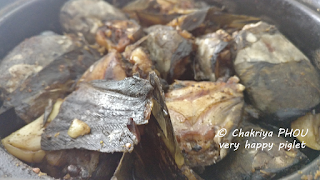 Number 3 can be braised without pepper, but this one cannot. It has to be cooked with pepper or it will be left at corner of wall.

Same process like braised fish, but it has no leaves of kaffir lime, only white garlic. And yes, special ingredient that cannot be lacked is pepper, black pepper. If we can get pepper from Kampot, oh my god., it will be heaven on earth. 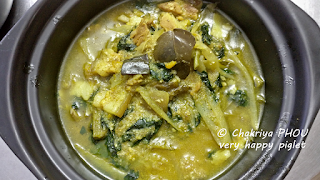 It is called national soup of Cambodia. It is used various kinds of Khmer vegetables, also Khmer spices. The meat to be added into this soup is fish, but we can use chicken or pork too. Like this soup, my family puts pork belly. 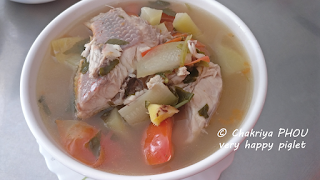 There are many kinds of sour soup in Cambodia. This one is called Vietnamese sour soup - that it is from Vietnam. 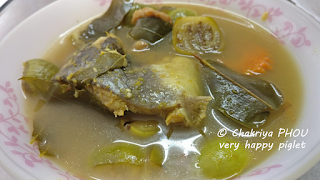 It is another kind of sour soup of Cambodian. I don't know to say in English so I use Khmer name.

I cannot describe how to make it, also the ingredient because I don't know how to cook it. 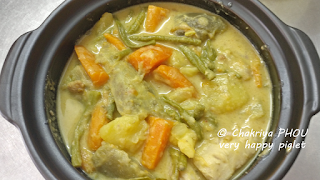 I don't know about the history. I just know that this one is made by my family, so I want to say it is from my family.

I don't like eating milky soup, but this one touches my heart. I enjoy it so much.

My family makes this because she wants me to eat vegetable.

Well, that's all what I want to show about the food.

Honestly, I don't like eating fish or vegetable. But these foods are delicious that I cannot deny to eat - because it has special ingredient that no where can make such  a taste.

Do you know what the special ingredient is?