Meaning of dream about flower 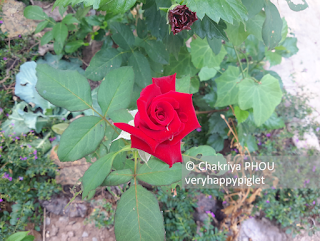 I want to share my own experience related to blooming flower appear in dream. I have spent for half of year to find meaning of it.

Now, I show you base on my dream.

I ever dreamt, under night sky, I stood and looked up and I saw flower in the sky. It was real flower and there were a lot. I did not remember what they were; I just knew that they were so pretty and I was so happy.

At that time, I was waiting for adsense reply related to my site submission to get monetization. After the dream, the google sent email to me that my site was approved - it could be monetized. However, I needed to perform technical act - I had to turn on ads, get code and apply to site etc. These things I had to do by myself. I had spent for two nights in order to show ads on my site.

Second experience was when I had submitted my second site to get approval from adsense. At that time, I did not think the adsense approved.

Then I had two dreams. First was about getting golden rings, and second was blooming flower in bright sky.

It was similar to dream #1; there were a lot of flowers in the sky; they were blooming prettily. Only one different was the sky was brightened.

After I had that dream, I received email from adsense saying that it approved yaya idea to be monetized. I was so glad. I hurriedly applied ads code to my site.

Because I ever did before, so I made ads show on my site easily.

One night, I dreamt that I walked along green grass field. It was huge and long. I walked freely and smilingly. Then I met a bush. It was big bush, but it looked like a bunch of trees grow together. I looked up and saw there were many blooming flowers; they were pretty and they were colorful. Then my father appeared near me. I told him to look at the flowers and asked him if they were pretty, and he agreed that they were pretty.

After the dream, about few months, I was told from my family that they bought a thing for me. I could not disclose what it was; I just could tell that it was huge gift that I never thought about.

Interpretation of the dream

With these experiences, I can guess that:

- blooming flower in dream means good news is coming; mostly, it tells that you got a gift or what you are waiting for is approaching you.

- if it appears in the sky, it means the news is coming through online - can be mail or phone.

- if it is on earth, it means the news is coming through person.

- if the sky is not brightened, it means you have to spend something, might be time or money, to get thing that the news is telling you.

- if the sky is brightened, it means you get thing easily.

It's what I have contacted with. I don't know if the flower in dream is dried or welted, because I don't ever have such dream.

However, it is my own experience. I cannot say it works same with you. You can read to take idea, but to interpret your own dream is depending on yourself - try to notice what's happened after you dream about the object.

Have a good day.

Posted by Chakriya PHOU at February 12, 2022
Email ThisBlogThis!Share to TwitterShare to FacebookShare to Pinterest
Labels: Meaning of dream