The glory of my grandparents - continued 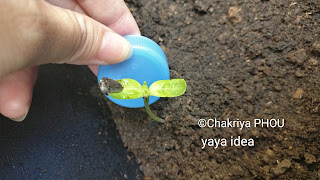 After my grandfather found the place, he told my grandmother, then they organized a moving house.

They told the soldiers who were their customers to find a new supplier, they sold the products in the grocery store and stopped importing new things.

For the house, I have no idea - because the one who narrated the story didn't remember since she was so young at that time.

After organizing everything, my grandfather hired a big truck carrying the heavy equipment such as the bed, wardrobe etc and also his family: my grandfather, my grandmother, my aunt, my mother and my twin aunts who were just babies.

The truck drove from Phnum Den, Takeo, across Phnom Penh and continued driving until it reached the new house of my grandparents at Sdau village, in Battambang province.

It is hard to imagine how my grandfather did it. It was like going from the south pole to the north pole, it was incredible he did it and he did alone.

We just heard a summary about his adventure in which he drove his lambretta searching alone. Like I mentioned previously, my grandfather wanted a place to live and to do business. He had gone to many places but they didn't match his wish. Until he had arrived at Sdau village, he saw it was the best location.

At that time, Sdau was in the process of becoming a new developing village. There were not many houses and people living there. But my grandfather sensed he could set his roots in that village because it would be the center of trade. He also had looked around and seen there were villagers growing beans, hence he could open a grocery store for wholesaling and retailing especially the bean.